Our Wise Old Owl house was 150 miles away from where we needed to be for Totality, so on Monday, August 21, we set our alarms for stun and got up at 5am. The drive was long but thankfully traffic was not the gridlock we had worried about. Not yet, anyway.

We arrived in Hopkinsville around 10am and found our reserved spots on a sun-bleached field that had been chalked into a grid. The lingering morning fog we had encountered as we entered Kentucky had burned away, promising a full day of sweltering and squinting at the cloudless sky. The atmosphere was festive, the crowd giddy with anticipation; Hubble-sized telescopes were set up next to amateurs who hadn’t even brought sunscreen. NASA was supposedly roaming around somewhere, answering questions. Our group had shelters and chairs and a buffet table, because if you’re going to bear witness to a celestial event, you don’t want your stomach growling while it’s happening.

The temperature was already in the 90s, a fact we knew for certain because my niece had arrived with a variety of activities to measure the temp drop for when the moon slid in front of the sun. We sat on blankets as we wove ultra-violet sensitive beads together to make ankle bracelets. The beads were pink and purple when exposed to UV rays, but would turn white when the sun and its’ beams were in shadow. That was how we would know that we were in totality; that and the fact that thousands of people would be screaming and pointing up in the dark.

Two hours away and people started checking the sky. Everyone had eclipse glasses, because they obviously had heeded the warning of the woodchuck, or possibly seen a million articles online in the past week about not staring at it with naked eyes. The tiniest bite appeared in the blazing white sun and a cheer went up from the crowd. Viewed through the filtered glasses, the sun was a perfect circle of orange. It looked like a logo design created with graphics software, the edges crisp and clean as the black crescent shape moved across the surface.

It was still full daylight, but something weird was happening to the light. It seemed to flatten, sharpening shadows and causing strange angles that were unfamiliar and foreign, like I imagine Bizzaro World would look. There is a filter in Photoshop that allows you to polarize an image and it felt like the entire landscape had been run through it. Tiny crescent shapes appeared on different surfaces as the splintered sun beams pushed through leafy trees. As the light drained from the sky, the air cooled and a chorus of cicadas woke up and began to sing. It was dusk to them and they were going to have sex no matter what time their phones said it was.

We were now just minutes from totality but not at full dark. Venus was a brilliant bright spot in the sky, but the horizon was still lit. I had expected complete darkness, but I realized that I could still see a thin band of sunset in front of me. Confused, I turned around and saw the same rosy glow behind me. To my astonishment, the sunset was everywhere! We had reached totality and the moon had blocked the entire star, creating a night sky on top of a perfect circle of a 360 degree setting sun. The effect was thrilling and surreal at the same time; it felt like we were on a different planet, one with more suns or a couple of extra moons. My bracelet was completely white, with zero UV rays reaching my ankle. For the next two minutes and forty seconds, I could throw away my sunscreen!

It’s hard to come up with an adjective that adequately describes what it felt like to be in the middle of that darkness in the middle of that day. A chill ran through me that had nothing to do with the temperature drop, and my eyes filled with tears. One would expect to feel insignificant in the midst of an extraordinary moment where it’s clear that our existence is barely a blip in the lifetime of the universe, but I didn’t. I felt connected, with the earth and all the people around me and all the others standing in fields across the country, staring up at the sky. It felt powerful, and unexpectedly hopeful. I haven’t felt hopeful in a long time, specifically since November 9. Chaos and confusion may be ruling our daily lives, but the universe is going to continue to do whatever the hell it wants. There is some comfort in that thought. 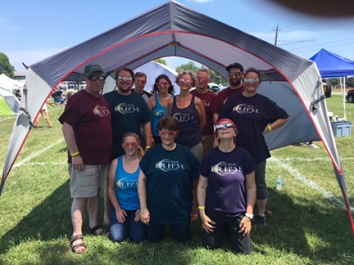 Part 3: The Really, Really Dark Side of the Moon

And then we got in our cars and drove home. All several million of us, at the same time. On the same road.

Talk about harshing your buzz.

We were filled with wonder and inspiration from this remarkable event that we had borne witness to as a community. We were not filled with common sense, for it did not occur to us that trying to drive home that night might also be on the agenda of everyone else in said community. It looked like we were evacuating Florida.

We tried small country roads where amused farm folks directed traffic through the lone stop sign, but cars still backed up for miles. The entire world used the Waze app and we all ended up at the same Dairy Queen for dinner in a town of 200 people. It took a really long time to get our Blizzards. Darkness fell and we were still barely a third of the way through Illinois. Torrential rain and non-stop lightning lit up a gridlocked I-57 North, where two lanes merged into one in a completely unneccessary construction zone that added at least two hours to the journey. When cars finally emerged from the single lane nightmare, every single one of them got off at the next rest stop. It took a really long time to pee. Fourteen hours after we had held hands and sung Kumbaya as a nation, we finally made it back to Chicago. It took a really long time to get my knees to bend into a standing position.

After the butt-numbing commute memories began to fade a bit, I was reliving the event on the internet and saw disappointment expressed in online forums about how unimpressive the partial eclipse had been; the word people used was “meh.”  I can understand why people weren’t that impressed because they were doing it wrong. Any fool could get up from the couch and walk out into the yard with a shoebox on their head and see the partial eclipse. But to really experience the whole phenomenon, you’re going to have to leave your living room. You’re going to have to commit.

Kelly Clarkson says some people wait a lifetime for a moment like this, but she’s wrong. You only have to wait seven years! On April 8, 2024, the Path of Totality will again cross the United States, this time starting in Mexico and going north to Maine. The center of the big X that started in 2017 will be the same place – Carbondale, IL, with many other towns along the Path where you will have a perfect view.

It’s hard to predict where we might be in seven years. We could be speaking Korean or living the script of Waterworld or, as I may have mentioned before, ruled by robot overlords. The robots might show us some pity, or I suppose they could tattoo bar codes on the back of our necks. But at least we can count on the universe to keep doing what it does, with the moon playing chicken with the Earth. As long as scientists can project real data and true facts that will give us lots of information about how and when to get ready, we can all experience this again together.

Or we can just pretend the whole thing is fake and kiss Uranus goodbye.

A writer/designer whose interests include Broadway, natural phenomenons, and procrastination. This is demonstrated by writing a blog about the eclipse instead of finishing the book I am supposed to be finishing. Also like cats. Woodchucks, not so much. View all posts by theblindwoodchuck.com

What does this mean?!

The Blind Woodchuck is my personalized stroll down the Path of Totality and Everything You Always Wanted to Know About the Great Solar Eclipse of 2017. It’s also a cautionary tale about woodland animals who don’t always play by the rules, which is kind of all of us, amirite?  Full disclosure: I am not a real scientist. Or a woodchuck.